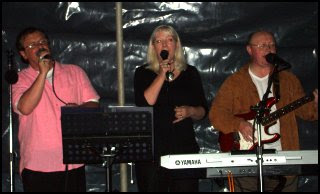 Great gig last night for David and John out at Larbreck Hall Caravan Park. Bob was unavailable so we performed as a duo.

We were going to do an outdoor, but the weather was appalling. The organisers had sorted out an old barn and built a stage with scaffolding, pallets stacked and carpeted over and a backdrop and sides of sheet plastic - pretty good too for such a temporary set-up!

The pallets were very springy though - when we started foot tapping and getting into the faster stuff I thought I was going to be catapulted off stage a couple of times but we survived and dragged Jeannie up to sing backing vocals for The Ronette's song Be My Baby.

Thanks to the holiday makers and residents at the caravan park for such a great reception and your enthusiasm! Thanks too to the very enthusiastic group of girls who screamed and shouted and kept demanding Bob The Builder for some strange reason! John managed to work it into his keyboard solo on Ho Ho Silver Lining - that has to be a world's first...!
Posted by John Burke at 03:41 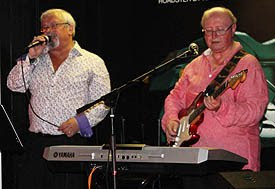